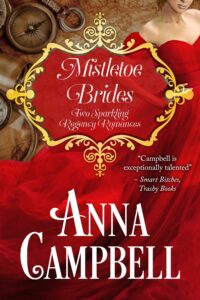 At last two Anna Campbell favorites together in print!

To save her hen-witted sister from scandal, Philippa Sanders ventures into a rake’s bedroom – and into his power. Now her reputation hangs by a thread and only a hurried marriage can rescue her. Is the Earl of Erskine the heartless libertine the world believes? Or will Philippa discover unexpected honor in a man notorious for his wild ways?

Blair Hume, the dissolute Earl of Erskine, has had his eye on the intriguing Miss Sanders since he arrived at this deadly dull house party. Now a reckless act delivers this beguiling woman into his hands as a delightful Christmas gift. Is fate offering him a fleeting Yuletide diversion? Or will this Christmas Eve encounter spark a passion that lasts a lifetime?

A Pirate for Christmas

Pursued by the pirate…

Bess Farrar might be an innocent village miss, but she knows enough about the world to doubt Lord Channing’s motives when he kisses her the very day they meet. After all, local gossip insists that before this dashing rake became an earl, he sailed the Seven Seas as a ruthless pirate.

Bewitched by the vicar’s daughter…

Until he unexpectedly inherits a title, staunchly honorable Scotsman Rory Beaton has devoted his adventurous life to the Royal Navy. But he sets his course for tempestuous new waters when he meets lovely, sparkling Bess Farrar. Now this daring mariner will do whatever it takes to convince the spirited lassie to launch herself into his arms and set sail into the sunset.

A Christmas marked by mayhem.

Wooing his vivacious lady, the new Earl of Channing finds himself embroiled with matchmaking villagers, an eccentric vicar, mistaken identities, a snowstorm, scandal, and a rascally donkey. Life at sea was never this exciting. The gallant naval captain’s first landlocked Christmas promises hijinks, danger, and passion – and a breathtaking chance to win the love of a lifetime.

Available in PRINT from: Amazon, The Book Depository, Booktopia